It was at the tail end of the Summer of 1988, when ‘Freeze’, an exhibition organised by a young Damien Hirst and some friends,  took over a warehouse in London’s Docklands. Catching  the attention of art collector Charles Saatchi,  what followed was a period in contemporary art dominated by many of those exhibiting at ‘Freeze’.

Collectively known as the YBA’s (Young British Artists), the 1990’s belonged to them. Coined ‘Britart’ it fed into the ‘Cool Britannia’of the latter part of the 90’s. Their work was seen as fresh, radical and most importantly, cool. Championed by arguably the most influential collector of the time, many of them, such as Damien Hirst, Tracey Emin, Sarah Lucas, Jenny Saville and Chris Ofili, became household names.

In 1991 Hirst produced his most instantly recognisable, iconic work ‘The Physical Impossibility of Death in the Mind of Someone Living’ – a shark suspended in a tank of formaldehyde. What has followed is 30 years of different fauna in formaldehyde; sheep, cows, pigs, sometimes whole, sometimes in cross-section. Sometimes individually suspended, other times in conjunction with other animals and objects.

These form the backbone of Hirst’s exploration of death and mortality. 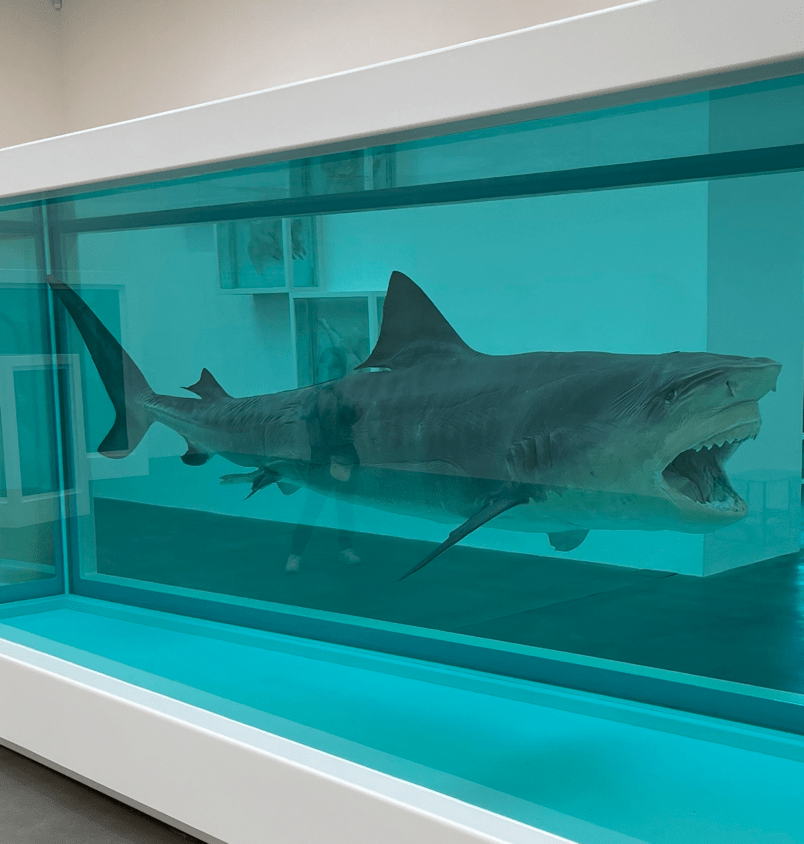 It’s not the original shark in formaldehyde as that one rotted! However there is still an undeniable heart flutter when confronted with one of Britart’s defining works. It’s big and muscular and there is still a remarkably visceral power to this work. It is still unsettling. Yes it’s dead, but it’s a big tiger shark with big teeth and that plays with our subconscious fear of predators.

The title of the original ‘The Physical Impossibility of Death in the Mind of Someone Living’ is exactly what we are faced with.

Hirst makes no secret of his admiration for Francis Bacon. Bacon’s paintings often ooze death and decay. The rawness of the brush strokes enabling the viewer to practically smell the flesh.

Part of a triptych (also a favoured Bacon display method), Hirst’s ‘In the Name of the Father’ draws heavily on Bacon’s ‘Figure with meat’. Sheep, dissected and strung up in three tanks, like Christ on the Cross. It’s an arresting scene.

But there is a potential problem when a contemporary artist decides to reference a master. Comparisons are Inevitable.  David Hockney’s current exhibition at The Fitzwilliam Museum in Cambridge, has as its central theme Hockney’s interpretation and study of the masters and their methods of drawing. Unfortunately Hirst is no Hockney and as such, when Hirst’s work is compared, it is found lacking.

What you see is what you get.

After a short while, one gets the impression, that despite their iconic place in contemporary art, they  are all saying pretty much the same thing and frankly, there’s only so much reflection on death and mortality I can do in one afternoon.