There was a moment in Ai Weiwei’s 2015 exhibition at London’s Royal Academy, when I was so deeply moved, that I looked on in both awe and sadness.

The work was entitled ‘Straight, 2008 – 12’. The viewer was presented with a carefully stacked sea of straightened steel rods. The rods, in an earlier life, had formed part of poorly constructed school buildings which had collapsed during the Sichuan earthquake of 2008, killing thousands. Originally buckled, now straightened, the rods resembled bodies carefully laid out as if awaiting burial. A work of undeniable simplicity and power. An indictment of poor construction practice in his native China.

Ai Weiwei has produced some significant works in his time. Works which are now synonymous with audacity and disbelief. The scale, often so vast, defying  comprehension, such as his ‘Sunflower seeds’; 100 million hand painted ceramic sunflower seeds poured onto the floor of Tate Modern’s Turbine Hall. The sheer bravado of Beijing’s ‘Bird’s Nest’ Olympic stadium is another example.

Ai Weiwei now no longer lives in China. Having fallen foul of the authorities due to his outspoken stance on China’s human rights record, he now lives both in Cambridge, England and Montemor-o-Novo, Portugal and therein lies, I think, part of the problem with his current work. Without access to a vast army of labour to help realise his artistic visions, Ai Weiwei’s more recent work is stripped of its impressive scale. He is still producing work critical of the Chinese authorities, but it’s now from a perspective of someone viewing China from the outside, therefore perhaps filtered or distorted through distance.

There is also the geopolitical dimension. Does Ai Weiwei’s art continue to be lauded in the West because it is critical of China or because it is good art? His continued stature would certainly fulfil a convenient political role. One can see that his work critical of the Chinese Government gets considerably more attention than his work on the European refugee crisis, although the latter also features prominently in his recent work.

‘The Liberty of doubt’ at Kettle’s Yard is billed as an exhibition which explores ‘truth, authenticity and value’, incorporating recent works and some earlier ones too. Unfortunately, this was a lacklustre display of work. One could even say it showed signs of an artist running out of ideas.

Below are some of the key works: 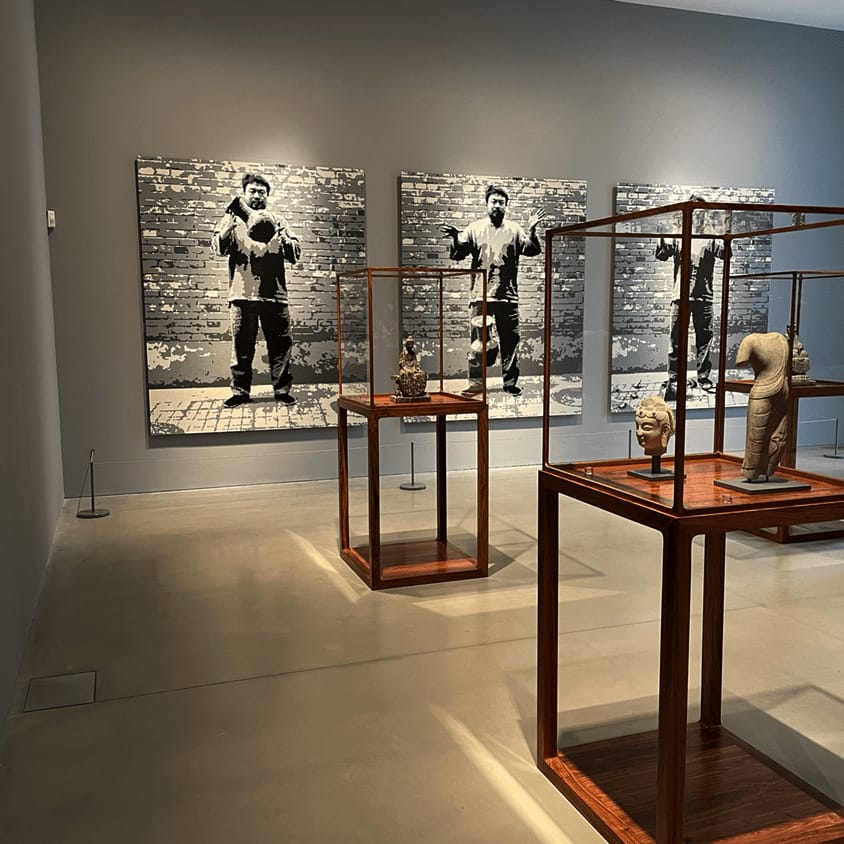 Several artefacts presented in display cabinets. The question posed by Ai Weiwei is, which are real and which are fake? A critique of the fact that the Chinese make a lot of forgeries (isn’t that a stereotype?) or a celebration of the art of the forger? But in a world where much is inauthentic, getting the viewer to speculate as to which pieces are real and which fake, seems a lame attempt at generating viewer engagement. 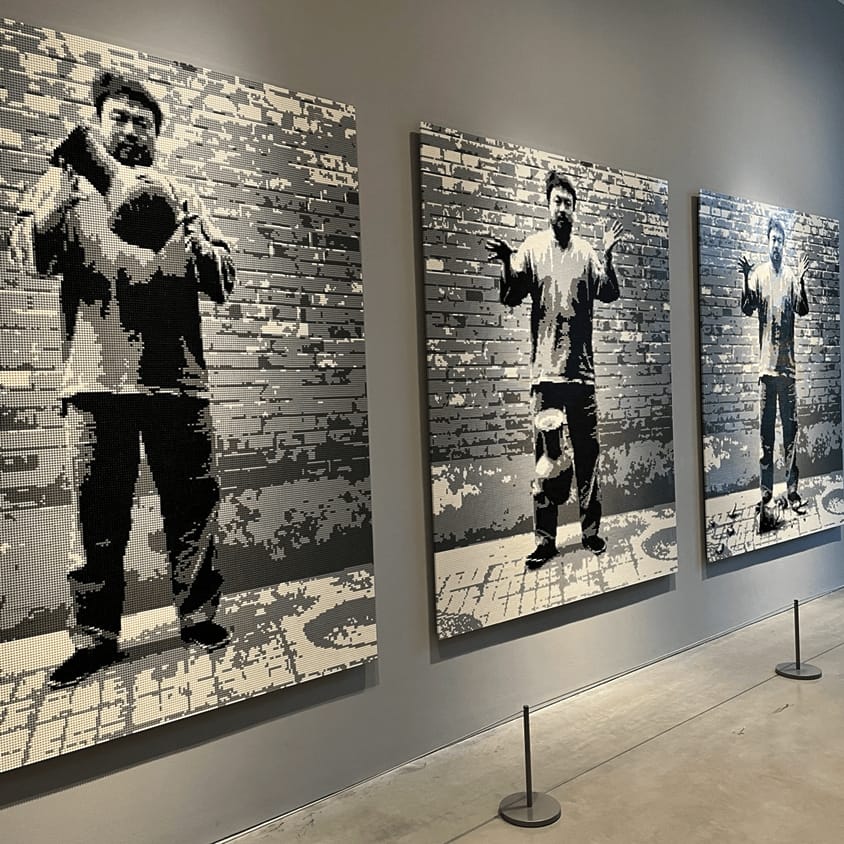 The original version of this work, is a key piece of Ai Weiwei performative art. As a criticism of China’s destruction of its cultural heritage, Ai Weiwei, took an original Han Dynasty vase and dropped it, thereby shattering it into pieces. However, I have never understood how destroying the very thing you are trying to
preserve, is anything but a form of cultural vandalism in itself. Presented here are the images from that act, recreated in LEGO bricks. 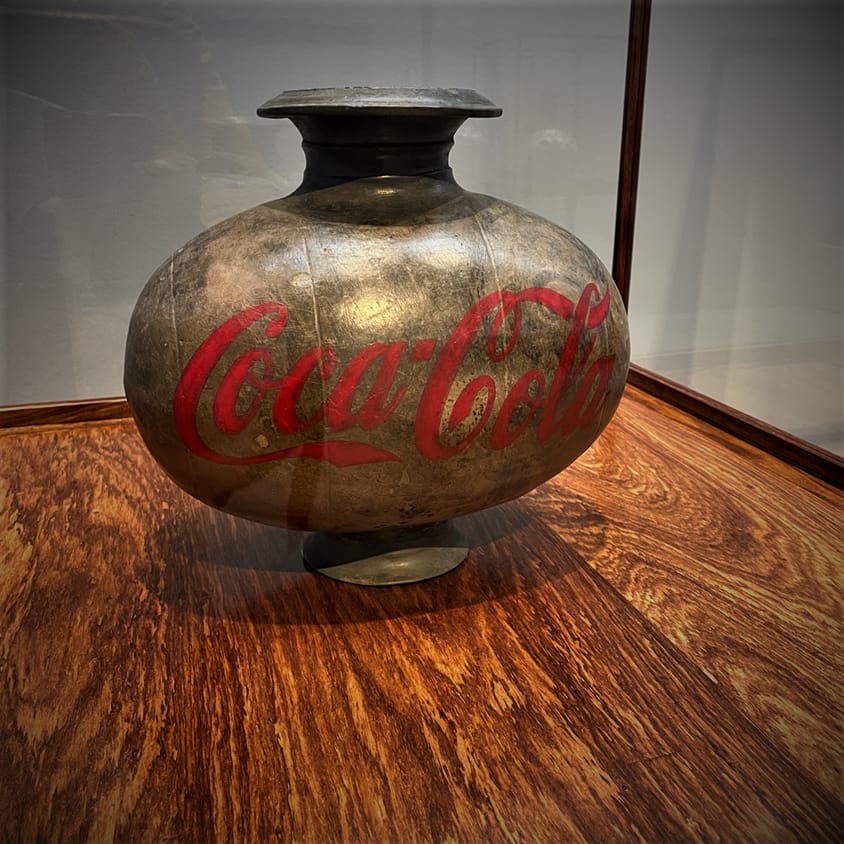 Another critique of the commodification of Chinese heritage. The logo is painted on an authentic vessel, thereby once again, as above, destroying a historical artefact to make the point that historical artefacts are being destroyed. 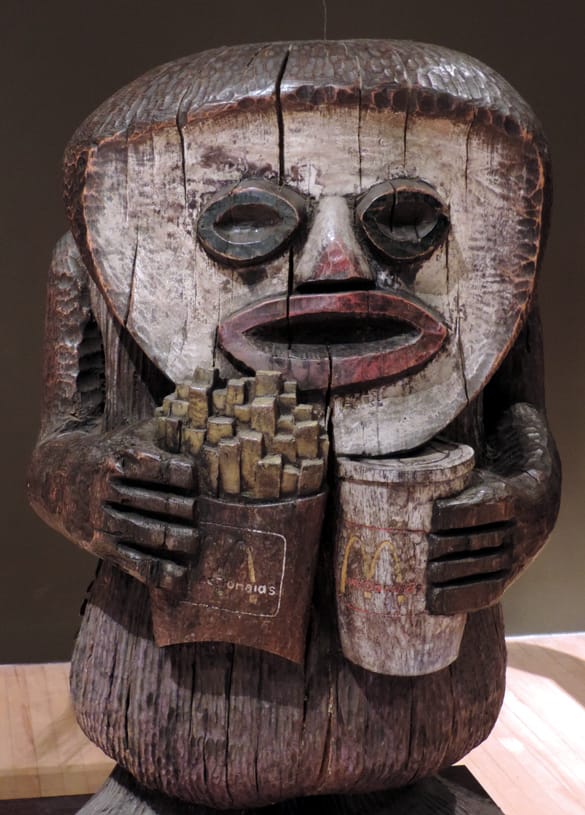 It’s not an original idea. In 2013 The Tate Britain exhibited a collection of works by Jake and Dinos Chapman entitled ‘The Chapman Family Collection’. At first glance a collection of ancient ethnographic objects. But these were not rare artefacts. Each bore some reference to McDonalds (see example left). So the issues addressed were similar to that tackled by Ai Weiwei, namely the commodification of history and museums’ tendency to present artefacts out of their cultural context. However what the Chapman brothers achieved was witty and moreover did not damage actual artefacts. 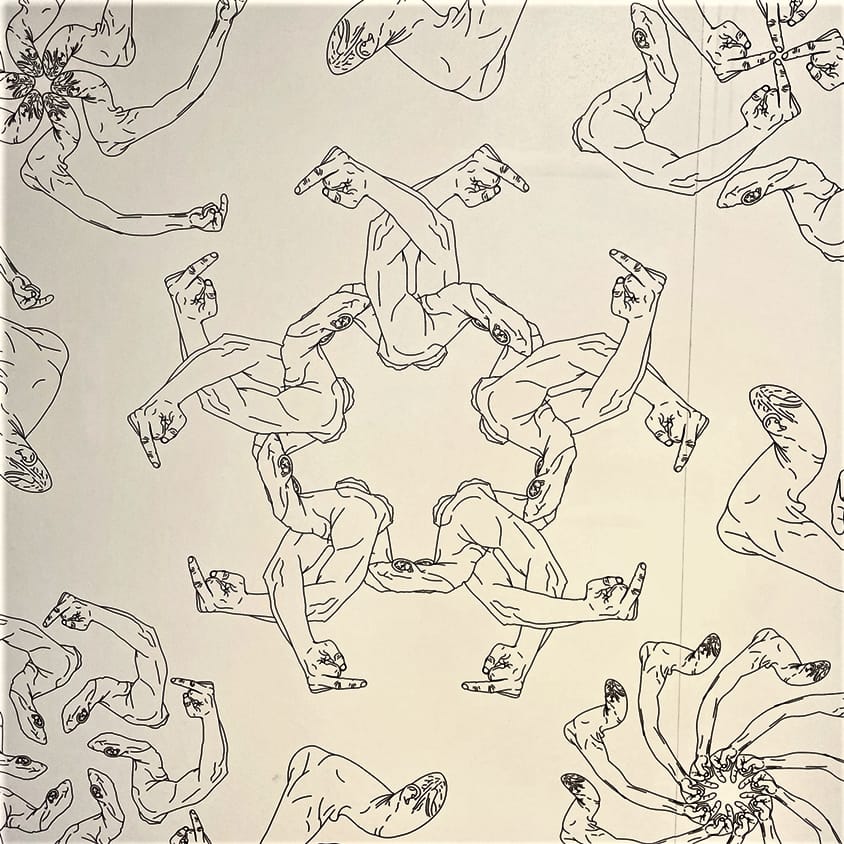 The wallpaper series is a highlight of the exhibition. Wallpaper, usually presented as a decorative background to enhance the surrounding space. Here however, the obscenity of the middle finger is used to startling effect. Both beautiful in its symmetry and damming in its message. China’s Number 1 dissident sticking the finger up at the authorities. 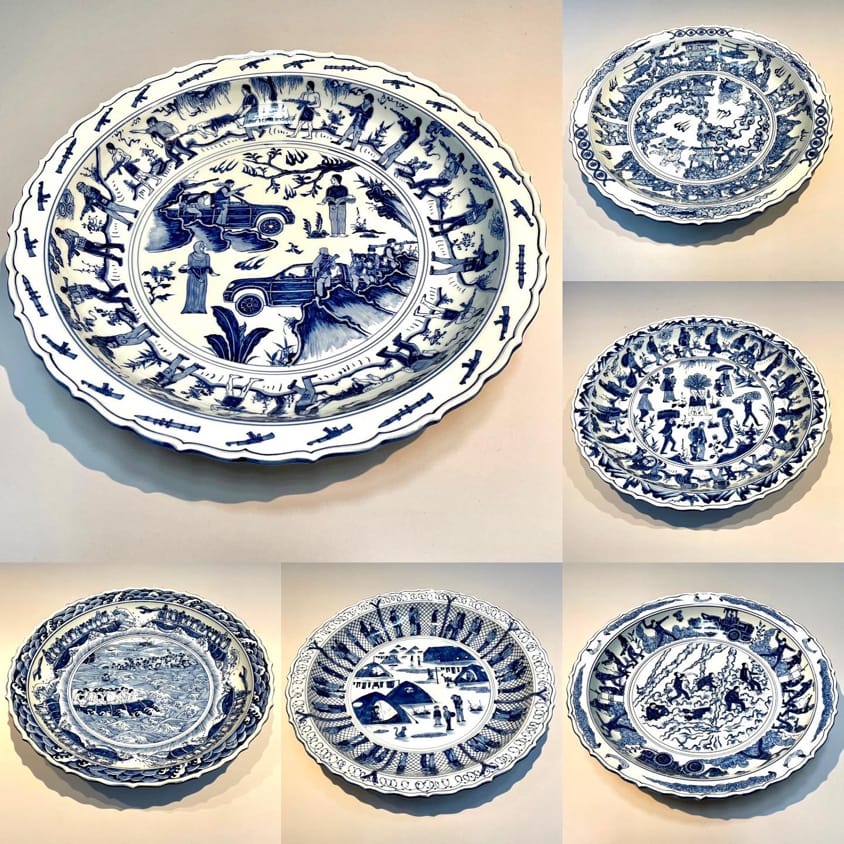 Perhaps the most poignant and depressing exhibit in the exhibition. Six porcelain plates painted in a recognisably Chinese style. The images, inspired by Odysseus’ journey home after the Trojan War, depict scenes of forced migration today and the dangers faced by refugees fleeing conflict. Depressing in that it highlights our inability as a species to learn from the errors of the past and our willingness to inflict horrors on our fellow humans time and time again.

‘The Liberty of Doubt’ as an exhibition certainly had flashes of brilliance, but those flashes were not as a result of Ai Weiwei’s recent work. It is wrong to compare the RA’s 2015 exhibition to this one at kettle’s Yard, as the scales, scope and intentions were different. Yet I couldn’t but help wonder that, having left China, Ai Weiwei’s best artwork is behind him. But, in reality, if I had to choose between producing good art or living in safety, I would choose the latter too.